Home > Article > There Is A Need For Ocean Environmental Education 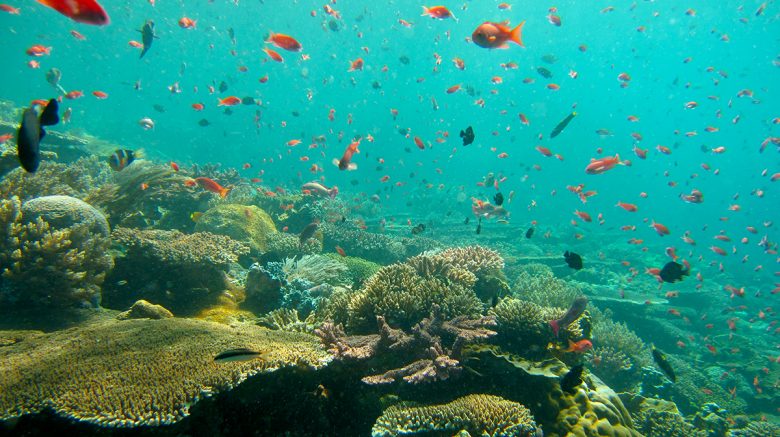 Humans have been polluting the earth for many centuries, and now the damages are becoming too much for the earth to bear. We are dumping millions of tonnes of trash into the ocean, exploiting natural resources, endangering countless flora and fauna, and cutting down our trees. According to scientists, we have 11 years to reduce carbon dioxide emissions by 45% to limit global warming to 1.5ºC, avoiding catastrophic effects. Year after year, our inconsiderate, uninformed actions degrade the planet little by little, and even when we theoretically know about the damage that we are causing, we are unable to change the course of our actions.

So, what can we do about this? As Einstein said, we must shift our perspective to change our world’s conditions.

The average American does not encounter the devastating effects of climate change in their everyday life. With the rise of a more technologically inclined world, we grow apart from nature everyday, making it difficult to care about a world we know little about. A recent Gallup poll shows that more than half of Americans do not believe that climate change will affect them personally. As a result, they end up taking actions such as using single use plastic bags or supporting companies that pollute the environment. Animals can consume the indigestible single use plastics, which causes their health to decline; while supporting companies or industries that heavily pollute our world can cause a steady increase in greenhouse gases, such as carbon dioxide or methane. Ultimately, these seemingly insignificant actions combined with poor environmental education contribute to the further degradation of our environment. As a result, increasing environmental literacy is one of the most important issues in today’s world. Education will empower future generations to care about their environment and undo the harm done to our planet.

The disconnect between humans and the world is even more prominent in the oceans, where the devastating effects of pollution, global warming, and habitat destruction is life under the sea. Although water bodies cover 70% of the Earth’s surface, the average Americans’ knowledge of water bodies is limited to swimming pools. Most Americans are unaware about the beauty of the oceans and the devastation occurring there. This “Out of sight, Out of mind” mentality is detrimental because our oceans are the world’s greatest asset. The oceans contain 94 percent of life on earth, produce nearly half of the oxygen we breathe, and hold 50 times as much carbon as the atmosphere. So, crippling the oceans is an enormous threat humanity.

Before we dive into environmental education, let’s review some of the most pressing ocean issues.

One example of marine pollution is plastic pollution in our oceans. By 2050, scientists expect more plastic than fish in the oceans (by weight). As a result, many marine animals are forced to feed on plastic, but because plastic is indigestible, it gets trapped inside their digestive system, taking up stomach space meant for food. Roughly over one million seabirds, 100,000 sea mammals, and about 300,000 dolphins or porpoises are affected by plastic pollution each year.

Plastic affects the health of marine organisms directly and indirectly by affecting coral reefs, an organism and an ecosystem. Coral reefs are vital for the health of the marine biome, holding more than 25 percent of marine life. Yet, they are threatened by human activities. For example, the likelihood of a coral being diseased increases from 4 percent to 89 percent when it comes in contact with plastic, so excess plastic near corals could eradicate the home of thousands of marine animals. The coral reefs as well as the marine life living inside of them would die.

Despite the recent attention towards this issue, plastics aren’t the only form of pollution affecting biodiversity under the sea. Nutrient pollution caused by runoff water from farms contains pesticides and are rich in nitrogen and phosphorous that cause an overabundance of algae blooms. This causes eutrophication, where algae smothers other marine life by cutting out sunlight and depleting oxygen levels while it decomposes. The food chain of that water body would be compromised, and habitats would deteriorate. Almost 415 dead zones have been identified in the world due to eutrophication. 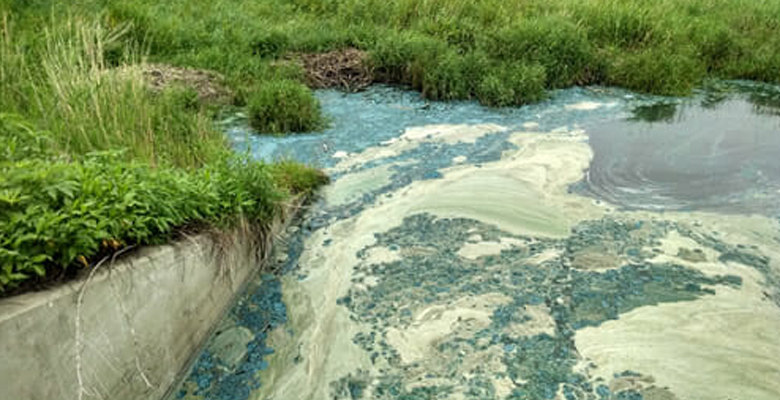 Eutrophication in a body of water is changing the color of this water body
Picture credit – John A. Downing/Minnesota Sea Grant

The immense amount of carbon dioxide in the atmosphere that causes global warming also affects the water bodies. When carbon dioxide comes into contact with water, it forms carbonic acid. This leads to the pH of the oceans decreasing each year. The surface oceans have decreased 0.1 pH since the inception of the Industrial Revolution, which means the pH has decreased 28% since then. All calcifying species will be affected and the food webs will be disbalanced. The decline in biodiversity is disadvantageous, since marine organisms such as phytoplankton produce about 50-85% of our oxygen.

The delicate state of the ocean is aggravated by overfishing, illegal fishing, and poaching. The irresponsible approach to fishing is shifting the balance of our ecosystem, which degrades the food chains and food webs, leading to a further decline in biodiversity. Warming oceans are causing the bleaching of coral reefs, which can cause the loss of up to 25% of marine life. 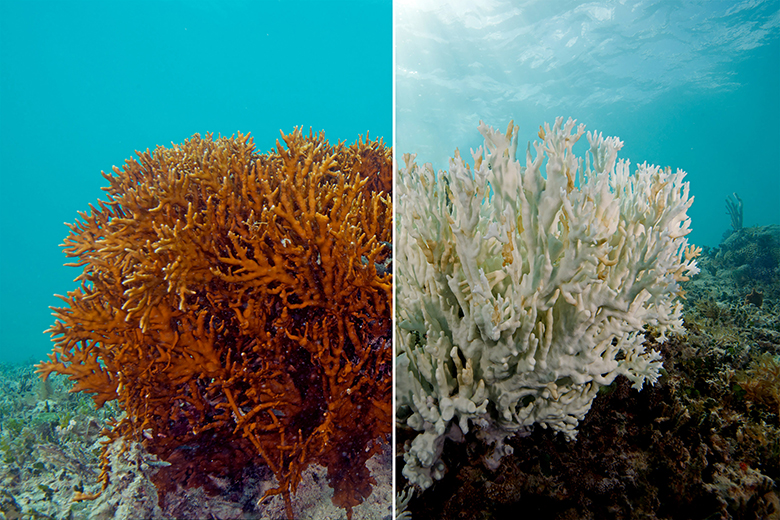 Before (left) and After (right) a major bleaching event on the Great Barrier Reef, Australia
Picture credit: Vevers, Richard. The Ocean Agency.

All of these issues occur because of the disparity between humans and the ocean environment. But, it is difficult for those that have virtually no connection to the ocean to form a deeper understanding of the ocean. Additionally, most schools never teach about our hydrosphere or have a strong science based curriculum, so most people grow up without this vital knowledge about our oceans. In fact, only about 20% of the population is scientifically or environmentally literate. Climate change is a difficult concept to understand because it is a very complex and abstract fact; it is challenging to connect all of the effects of climate change. Improving education about our own world is crucial if we want to save the environment.  By harnessing the power of education to teach the public about the effects of their everyday activities and what actions they can take, we can improve the world little by little.

Environmental education has multiple levels. Simply learning about what causes global warming is unlikely to inspire action. To be an environmentally active and globally conscious, everyone must also be educated about the effects of global warming, feel a personal connection to our planet, and learn how to stay up-to-date on environmental politics.

However, I was confused on how to bridge the disparity between the ocean and the majority of the public if they never see the ocean, so I interviewed Research Analyst Lucie Hazen of the Stanford Center for Ocean Solutions to better understand how to forge an emotional connection with the ocean. Hazen says that there are “large middles” in the United States that do not feel a personal connection with the ocean and as a result are ignorant to the devastation, so harnessing the power of social media and technology is vital to educate these “large middles”. She added that documentaries such as Blue Planet capture the horrors occurring under the sea and evoke strong emotions from the audience, and technology like virtual reality allows the user to experience the ocean more closely.

Dr. Erika Woolsey, an Ocean Design teaching fellow at Stanford Center for Ocean Solutions and founder of the environmental non-profit The Hydrous, does just this; she uses virtual reality to educate the public about the wonders of the ocean. I had the opportunity to view her work and was fascinated by it. I wanted to understand her opinion on ocean environmental education and set up an interview with her. According to Dr. Woolsey, encouraging the public to “think like a scientist” is the best way for them to be more involved in climate justice and environmental action. “Thinking like a scientist” could be anything from questioning media with misconstrued information such as climate change denialism to exploring or spending time in nature. Empowering everyone with the ability to become a scientist would make them more likely to engage in climate activism and change their own lifestyles. And, while Dr. Woolsey agrees that seeing and understanding the vast destruction occurring in the world could make others feel powerless at times, she says that it is important to remember that “Just because you can’t do it all, it does not mean that you can’t do anything.”

These words are especially meaningful in today’s political climate. While our current administration in America is averse to beneficial climate policies, it is our responsibility to remain environmentally conscious and aware, whether it be by taking everyday actions to mitigate climate change or being politically active through protests and demonstrations. It is important to remember that we shouldn’t have to wait on governmental action via our current administration in order to make a difference in our world. California is spearheading this environmental policy reform movement in America with bills such as SB 837 about preventing offshore drilling and AB 1826 about waste management. Their actions are beginning to change their communities and ultimately, our world.

In order to make a difference today, educating the public and encouraging them to take an initiative to help the planet is the first step. While studying climate change education and speaking to Dr. Woolsey and Dr. Hazen about climate change education, one thing became clear: For people to take action, they have to feel a deeper understanding of our world and be driven by a love for this beautiful planet.

“The Ocean and Cryosphere in a Changing Climate.” IPCC, www.ipcc.ch/report/srocc/.

Blumstein, Daniel T, and Charlie Saylan. “The Failure of Environmental Education (and How We Can Fix It).” PLoS Biology, Public Library of Science, May 2007, www.ncbi.nlm.nih.gov/pmc/articles/PMC1847843/.